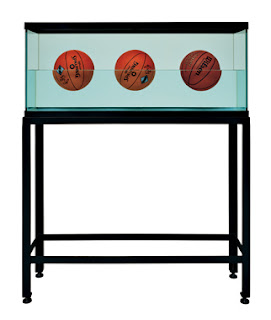 The Three balls 50/50 equilibrium tank contains three professional sized basketballs that float in a half filled fish tank. Each ball is a different type of ball and/or brand of ball. The tank is a large enough size so that the balls can float side by side horizontally and still not have to touch each other or any parts of the tank. Each of the balls were hollowed out except for a small amount of sodium chloride reagent that kept the balls afloat for approximately six months. The glass tanks are sitting on top of a black steel stand which seems to help put the work at about eye level.

In this work it appears as if Koons is advertising both the sport of basketball and the brands of the balls themselves. However, “For Koons, the tanks were an ultimate state of being (tate.org).” The underlying theme seems to be a bit darker with a message of the use of art in parallel to the use of basketball. “Over a period of six months the balls gradually sink to the bottom of the tank and have to be reset. Because of this, they may be seen as representing transience, human frailty and vulnerability to change in fortune (tate.org).” In these works (koons made multiple works with one, two, and three balls) Koons shows concern and makes underlying psychological and philosophical statements with optimism toward the underdog.

This work reminds me of Andy Warhol’s use of Campbell’s tomato soup cans and his Brillo boxes because it uses common everyday things but could also be portrayed as a type of advertisement as well. The three balls work is also similar to the Kilkenny work of Richard Long who brings outside material into his gallery. This is similar because the outside materials that Long brings into his gallery is out of place just as Konns’ basketballs are out of place within a fish tank. These things bring up a question of spatial relationships and what is to really be considered as art.